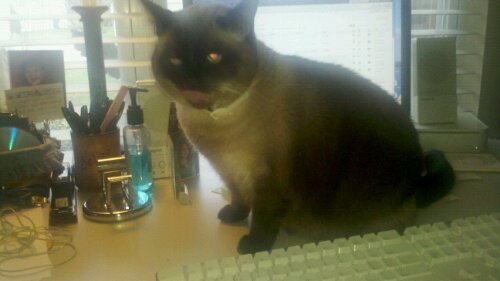 When Biskit needs to talk she just really doesn’t what kind of important work you are trying to accomplish.  At this point I wasa trying to link my NaBloPoMo article that day. However Biskit needed a little girl time. I suppose she really just wanted me to see how breathtakingly beautiful she is. And as you can she she ain’t no scrawny barn cat. I still don’t know exactly what it was she wanted. But she did enjoy chasing to cursor around my computer screen as I worked. Such a cutie!

The cuteness of Chewey is the topic of my Phone Photo Friday entry today. That little man is so adventurous. I never knew cats actually WERE rambunctious and adventurous until we got this little guy. Biskit is fat and old and lazy…..wait is that ME or HER……either way Chewey is keeping us on our toes around here.

The weather has been positively amazing this week. I haven’t gotten out as much as I would have liked to enjoy it. But today I opened the windows and Chewey has been in every single one. I think he believes he’s in a different world in each window. I never said he was smart – just adventurous. So I opened the kitchen windows and before I could even finish opening them he was in them. He’s been in 87 different windows since these pictures were taken. Ok, 87 might be a bit of an exagerration considering our house is only 2000 square feet. But you get the idea.

Here he is in all his adorableness!

I tried to get his attention to pose but he refused to look at me. Cats are like that, you know!

I had to go outside to get a picture of his face. Little stinker! 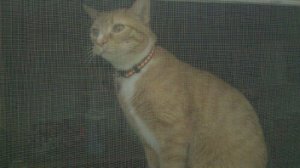 He had his eye on something interesting! 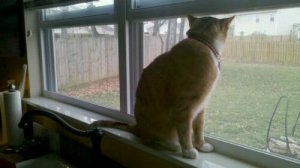 Thanks for visiting with us today for Phone Photo Friday. Jump over to the website and visit with some others too.

I got an adorable picture of Chewey this week. So I’ve decided that is the one I’m gonna share for Phone Photo Friday this week. He is such a stinker but he is so adorable. He’s just too adorable for his own good. I was sitting at my desk one day with the blinds open. There is a chair right next to the desk mostly for people but the cats like to jump up there when someone is at the desk too. Of course Chewey had to jump up and see what I was doing. Just as I was about to show him how to add a tweet and create a blog post he was distracted by some birds playing on the porch outside the window. I pretty much lost him at that point. Kids these days just can’t stay focused on one thing. Anyway here he is in all his handsomeness!

"WHAT WAS THAT? Did you hear that?"

I especially love how his long tail wraps around his paws in the front. He’s so proper – except when he is throwing up all over the house….SIGH!!! That’s not so proper.

Later that day he was also checking out the birds on the back porch. I’ve decided he is a birdaholic. Here he is keeping an eye on the birds in back. 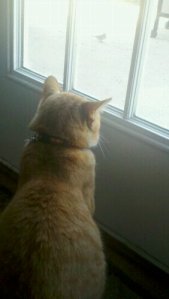 See that one bird just struttin’ it’s stuff in front of him. It makes him crazy. They just dance around in front of the windows teasing him. I’m thinking about letting him go out some during the days in the spring. I suspect he will take care of those crazy birds then. He will be so angry when he learns they will be able to fly away from him.

Did you get some good pictures on your cell phone this week? Jump over to Circle of Love and show them off for Phone Photo Friday!

END_OF_DOCUMENT_TOKEN_TO_BE_REPLACED

Today’s Phone Photo Friday picture is a picture of a picture.  Ron bought this painting for me on our cruise in the Dominican Republic.  A guy had a booth set up on the beach selling his paintings.  Ron bought me this one.  Lauren bought a smaller version of it for her room.  She doesn’t have hers framed yet.  Ron just framed mine last night.  When I woke up and went downstairs this morning.  This is what I saw.

Beach in the Dominican Republic

It is on our mantel. As you can see it is huge!  I positively love it.  I’m looking forward to finding a place for it.  It will be a challenge to find a spot because it is so big.  I want to put it in our bedroom.  But I want the walls painted first.  I want to pain them an aqua color like the water in Nassau.  Breathtaking!!  It’s a little like the beach is in my living room – except without the sand.  Thank goodness!!!

Today’s Phone Photo Friday entry was an easy one to put together.  I decided to share the Christmas ornaments that we have bought for this year as well as some that I have mentioned here in past days.  And since I always take my pictures with my cell phone this was super easy!

I’m not sure where the history of the Christmas tree and Christmas ornaments came from and I don’t always appreciate it as I should but this year I’m all about it.  I may just have to look that up actually.  I bet that is some interesting tidbits of information.  Who knows, I may just do a whole research project on the history of the traditional Christmas with Santa and the whole shibang!  Sounds like I’m talking myself into some work.  Don’t worry!  You will appreciate!  I promise! END_OF_DOCUMENT_TOKEN_TO_BE_REPLACED

Advocare – Health Hope and A Future

Pour Your Heart Out

Messages From My Dad

This is Osceola - He is one of the respected symbols of the Florida State University Seminoles Football! Once they finish with the war paint and regalia he assumes the spirit of Chief Osceola. Those EYES could stare down any enemy. #fsufootball #fsu #photochallenge #photographer #photoaday #photogrid #pictureoftheday #instapic #picsart #picturethis365 #155_eyes
{3-C} My “C”Ovid quarantine partner! #quarantinelife #quarantinepartner #dogsofinstagram #fsmpad #photoaday #photoadaychallenge #fmspad2020 @fatmumslim @fms.photoaday #fms_c
All of this is 100% true!!! Repost from @fibromyalgia_inspirational using @RepostRegramApp
#blackouttuesday Repost from @leighannetuohy using @RepostRegramApp - 1. Posting a black square does NOT make you anti-racist! 2. Take a stand AGAINST racism! Get involved! 3. Silence is NOT an option! 4. Do NOT tolerate violence against black people! 5. Be committed to being a part of the long term solution! 6. Realize words and posts are NOT enough! 7. Be kind to all! Love instead of hate! 8. Confront racial injustice even when it’s uncomfortable. 9. Be a part of the conversation and the education of making a difference! 10. Remember actions speak louder than words and post! 11. Pray!!! John 13:34 LOVE ONE ANOTHER #BlackOutTuesday🖤
{2-B} B is for Bible verse! I came across this one this morning. I think the world could put this verse to practice right now and we would see a LOT OF CHANGE!! #actjustly #lovemercy #walkhumbly #micah6v8 #fsmpad #photoaday #photoadaychallenge #fmspad2020 @fatmumslim @fms.photoaday #fms_b

My name is Pam. I am a very happily married 45 year old SAHM. My kids are 17 & 18 and are both freshmen in college. I am an AdvoCare Distributor whose life has been changed by the use of the products that have given me my life back. We have had quite a family journey. All steps have led us to the point we are at now in our lives. I'm excited to see where God has in mind for us to go from here. This blog is about the journey of my life and what the future holds for the 4 of us. This journey has now led my husband and I to an empty nest, which I will spend the rest of my life trying to figure out how to manuver.

What Number Are You?

Encouragement From The Word